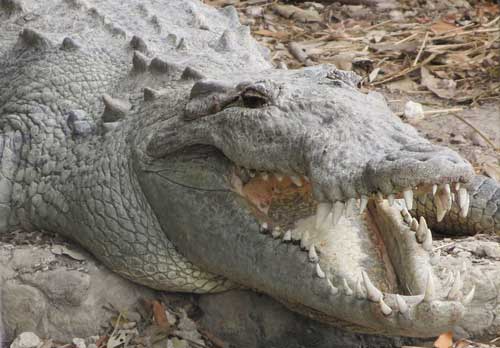 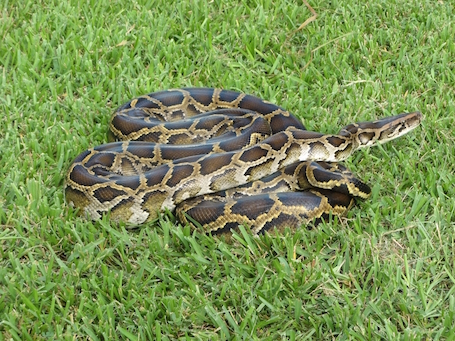 Picture-snapping tourists love the American crocodile, pictured at top, and
the American alligator, shown at right. The Burmese python, shown above,
is not loved in Florida. 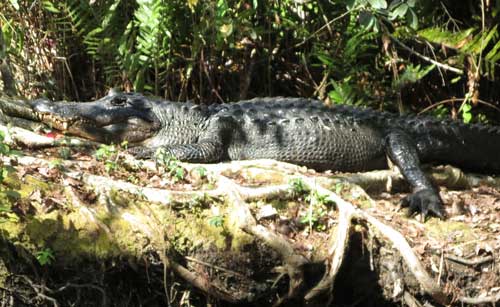 Up to 12 feet long and packing a set of painfully sharp teeth, the American alligator and American crocodile shouldn't need help defending themselves from anything.

But they do. They're at risk from a monster snake.

According to a University of Florida website, The Croc Docs, Burmese pythons grow to 20 feet or more, live 15 to 25 years, and lay up to 100 eggs per nest.

"They feed on a wide variety of native wildlife, including threatened and endangered species, and compete with native predators for food and habitat," university researchers say.

Ironically, the snakes are considered vulnerable in parts of their native wild range. They're prized for their attractive leather. But they're out of control in Florida, so scientists here are using technology to track the invaders for clues into their habits and habitat.

And they're dissecting them.

Some of the dead pythons were furnished through an officially authorized harvest of the invasive species offering cash prizes. In 2013, hunters removed 68 pythons from areas close to the Everglades National Park. The Florida Fish and Wildlife Conservation Commission reported more than a thousand hunters took 106 snakes in 2016. As of this year, the state paying people by the hour to hunt the snakes.

But they're still out there.

Florida gators and crocs probably catch a few pythons themselves, since they eat snakes. But while alligators in particular are often seen sunning, swimming, and posing for picture-taking tourists, pythons play a mean game of hide and seek, lurking underwater or well hidden in vegetation.

That's why if you see a Burmese python where it shouldn't be, you need to notify the authorities immediately.

And don't adopt a pet that can grow up to 20 feet long, eat you out of house and home, and maybe even eat you. Likewise, if if you already own one and are tired of it, please don't release it in a park or wildlife area like the Everglades. Our native gators and crocs will thank you.